Click the “Export Grades to Excel” button to create an excel document with your current class’s TEAMS grades.
Optionally, you can modify this file and then re-import it with new grades. Or you can use this to make a quick class roster.

There are three types of files the Teacher Tools extension can currently import. These will be referred to as “Excel File” from now on.

To import grades, drag-and-drop your Excel File onto TEAMS , or click Choose File to select a file from your computer.

The Import feature will do the following:

In order for the Grade Import feature to work ensure the following are true:

When you install Teacher Tools, Chrome will prompt you for permission to “Read and Change your data on a number of websites”

This is necessary in order for Teacher Tools to enter grade values on your behalf.

If you click Show Details you will see only the websites of school districts that use the Teams gradebook.
Teacher Tools does not have access to any websites other than those listed there: 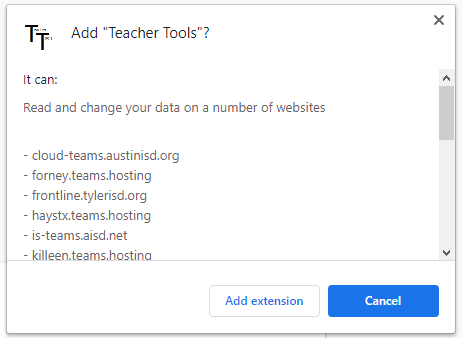 You can further limit TeacherTools to only run on your school district site by modifying the “Allow Access” option in the Chrome Extension Settings.
Click here to see how.

Version 0.2.9:
• Support for more text grade values (INC, EXE, NG, and more!)
• Support for one decimal place in grades above 1. Grades between 0-1 and rounded to 0 or 1.
• Native support for iXL Score Grid Gradebook View export reports

Version 0.2.6:
• Added support for grade values of “Missing”, “Excused”, and “Incomplete” to aid in importing grades from Schoology
• Added support for grade value of “N/A” produced in some instances by Canvas (interpreted as a blank)
• Added notifications for invalid grade values: Negative numbers, too large of values, or invalid text values.
• Fixed bug when importing Canvas files to only remove parentheses when they contain a purely numeric value (To remove the auto-generated Canvas Assignment ID appended in parentheses).
• Removed support for importing assignment with names containing “<” and “>” to protect from malicious attacks.
• Renamed “ferpa()” function to “TTferpa();” to mask student names and IDs

Version 0.2.5:
• Re-implemented support for all school districts using the Teams gradebook. Note: Teacher Tools will request the ability to “Read and change your data on a number of websites”. The websites listed are the school districts that use Teams.
• Migrated to JQuery Dialog boxes to allow more text than Browser Alert and Confirm commands
• Removed logic for detecting “Pass” and “Incomplete” from Version 0.2.4 as it was only needed for Spring 2020.
• Added “ferpa()” console function to hide student names and IDs to assist with remote troubleshooting while respecting student data privacy.
• Added Google Analytics for anonymous user interaction data collection
• Added Paypal Donation link to extension popup menu
• Migrated Help documentation to www.shafferware.com/teachertools

Version 0.2.3:
• Added support for detecting incorrect “Pass” versus “Incomplete” designations on the Report Card tab due to new grading policy as of May 27, 2020.

Version 0.2.2:
• Added support for accessing Teams from either the “cloud” or the “portal” in Austin ISD.

Version 0.2.1:
• Removed the permissions for the extension to work in any school district. This caused users to need to accept too broad of permissions. [*.* is unacceptable. A new solution is being developed to support multiple school districts]
• Updated User Interface to streamline appearance.